By Emily on Wednesday, October 10th, 2018 in Gemstones, Informational. No Comments

Where in the world does tourmaline come from? Tourmaline deposits can be found in various locations around the world including the United States, Brazil, and Africa. Both Madagascar and Afghanistan are known for producing fine red tourmaline. What color are tourmalines? Tourmaline can occur in any color. In fact, it has one of the widest color ranges… Read More

By Emily on Wednesday, October 21st, 2015 in Gemstones. No Comments

Those born in October have not one, but two choices when it comes to their birthstone. Both opal and tourmaline are recognized as the official gemstones for October birthdays. For this week’s blog, we’re going to highlight some fascinating facts about tourmaline. There are multi-colored tourmalines (including a gorgeous watermelon tourmaline) where two or more… Read More 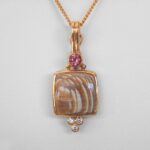