Known for their dark overtones, Tahitian pearls first came into the limelight during the 1970’s when they quickly became a symbol of status and prestige. Here’s everything you need to know about these gorgeous gems. The history of Tahitian pearls starts in 1973, when Salvador Assael partnered with Jean Claude Brouillet and launched their Tahitian… Read More

By Emily on Wednesday, January 24th, 2018 in Informational, Pearls. No Comments

Commonly known for their black color, Tahitian pearls are indigenous to the South Pacific region of French Polynesia. Second only in value to South Sea pearls, Tahitian pearls represent some of the most sought after pearls in the world. They are cultivated from the black-lipped variety of the pinctada maxima oyster and take many years… Read More 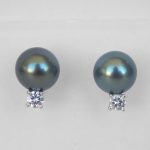