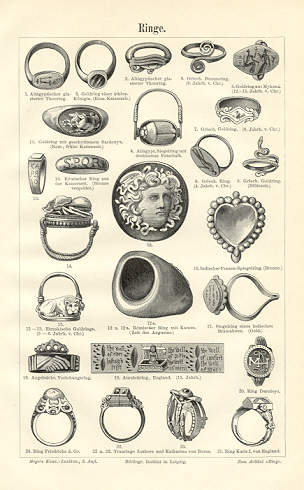 Presenting an engagement ring during a marriage proposal is something that has become a ritual for so many people. But how did this tradition first come about?

The act of presenting a significant other with an adornment actually dates back to pre-historic times. It is reported that cavemen would braid bands of grass together and tie them to their partners’ wrists and ankles. Because jewelry was thought to ward off evil spirits, this was the perfect gesture to show how much they loved their significant other.

Before the nineteenth century, diamonds rings were very rare. The first recorded instance of a diamond engagement ring dates back to 1477. Archduke Maximilian of Austria declared his love for Mary of Burgundy with a ring that displayed the letter “M” in thin, flat diamond silvers.

Now flash forward to 1867, when diamonds were first discovered in South Africa. A few years after the initial discovery, over a million carats of diamonds were being mined a year, thus significantly increasing the worlds diamond supply and making them more affordable.

So why have diamonds become the popular choice among so many couples seeking to get engaged? There are a couple of reasons. First, the durability of a diamond conveys the eternality of marriage. Another reason is that the purity and sparkle of a diamond have become a symbol of one’s commitment to another.

Besides, who can resist the allure of an exquisite diamond?