Signet Rings: The Past and Present

Signet rings remain to be one of the most popular jewelry options for both men and women. The rings, which feature a flat bezel, are usually engraved with initials or a unique symbol. They have been around for thousands of years and have been worn on the hands of many important people including Egyptian queens and William Shakespeare. In the past, signet rings were worn a status symbol. Anyone who had some sort of social standing and land ownership wore a signet ring to show off their high social status.

Not only were signet rings worn to display one’s status, but they also played a vital role in ancient society. The rings were used as a form of identification, similar to a signature commonly used today. Melted wax would be placed on important documents and then the signet ring wearer would imprint the top of his or her ring into the wax, leaving a clear mark used to identify the “signer.” Like modern signet rings, these rings were engraved with a unique symbol or depiction, such as a family’s coat of arms, monograms, and family seals or initials.

After more people become literate and the use of signet rings as legal marks declined, the rings still remained popular. Instead of being used as a form of identification, signet rings became more of a personal statement. Those who wore them did so because they felt the unique engraving on the ring represented who they were as a person.

Design wise, today’s signet rings are similar to the ones worn thousands of years ago. Some people choose to have their family crest engraved on the ring, while others have their initials or another personalized design engraved on the ring. The most popular finger to wear a signet ring is on the left pinky, however it’s common for many people to wear it on their left ring finger as well. Many people purchase signet rings with the intention that it will be passed down from generation to generation, with the hopes that each new owner can have a tangible link to his or her ancestors. 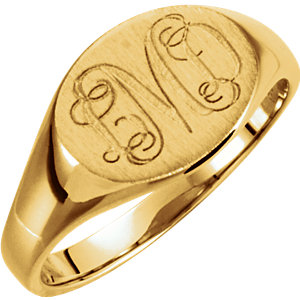