By Emily on Wednesday, January 26th, 2022 in Birthstones, Gemstones. No Comments

The designated birthstone for January, garnets can be found in a variety of different colors. However, they’re most known for their beautiful dark red color. Here are some of our favorite garnet jewelry pieces.  Garnet and Diamond Ring  Oval Garnet and Diamond Halo Studs  Garnet Heart Pendant  Rhodolite Garnet Studs  Star Shaped Garnet Studs You… Read More

By Emily on Wednesday, January 4th, 2017 in Gemstones, Informational. No Comments

When you picture a garnet, you probably envision a dark red gemstone. However January’s birthstone can actually be found in a variety of different colors. Most gemstone quality garnets can be classified as one or a mixture of these five different types.  Almandine is the most common type of garnet and can be found in… Read More 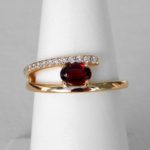 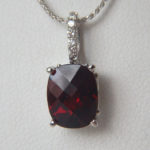