What is tanzanite? Initially discovered in the late 1960s, tanzanite is a bluish-violet gemstone belonging to the zoisite mineral family. It is one of the most sought after gemstones in the world and is prized for its striking color. Where does tanzanite come from? Found in only one location in the world, all tanzanite gemstones come… Read More

By Emily on Wednesday, December 7th, 2016 in Gemstones, Informational. No Comments

Not only is turquoise the designated birthstone for the month of December (along with zircon and tanzanite), it is also the recognized celebratory gemstone for the 11th wedding anniversary. Turquoise is one of the world’s oldest gemstones and has been used in jewelry for thousands of years. Old Europeans credited turquoise with helping achieve a… Read More 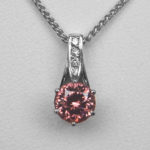