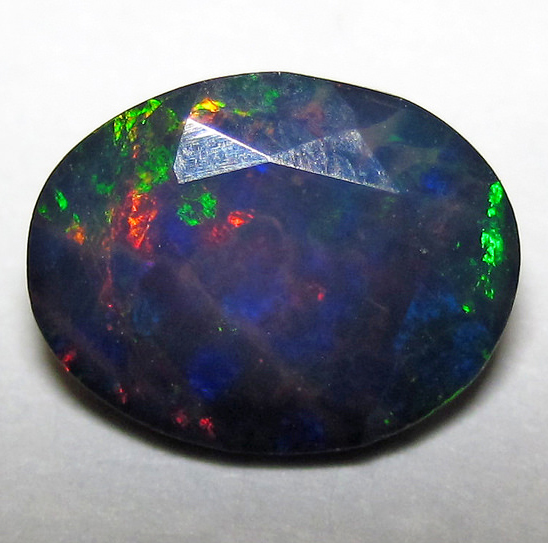 Where in the world do opals come from? Over 90% of the world’s opals come from Australia. In fact, a small town in New South Wales called Lightning Ridge is one of the few places in the world that produces high quality black opals. Other known locations for opals include Nevada, Mexico, Peru, Brazil, and Ethiopia.

Where does an opal’s color come from? An opal’s iridescent color display is caused by light diffraction. Millions of tiny silica spheres refract light and turn it into the colorful spectrum noticeable in most opals. These spheres have to be just the right size and in just the right position to create enough color for us to see.

What are the different varieties of opal? The most common is white opal, which features vibrant pastel flashes against a lightly colored body. Black opal is another variety and features a blue, gray, or black body. Typically, these opals have the most dramatic color play. Fire opals, on the other hand, usually display very little color play and have a red, orange, or yellow body. Boulder opals have an appearance similar to that of black opals, but are easily distinguished in large part to their brown ironstone back. Lastly, crystal opals refer to any opal that is transparent or semi-transparent.

Can opal jewelry be worn every day? Opals have a rating between 5.5 and 6.5 on the MOHS scale of mineral hardness. This means that they require more care than other harder gems to ensure they don’t chip or break. Therefore, we recommend selecting another gemstone for an engagement ring or another everyday jewelry piece.

How are opals formed? Believe it or not, opals are formed from rain. As water runs down through the earth, it collects silicon deposits and then seeps into rock cracks. After most of the water evaporates, it forms a silica deposit that eventually turns into opal.

What determines the value of an opal? An opal’s value is typically based on its brilliance and pattern of play of color. Like other gemstones, size also plays a significant factor in value, with larger opals demanding a higher price tag than smaller ones.

Do opals symbolize anything? Opal is believed to be the gemstone of hope, fidelity, and purity. The gemstone of positive transformation, opal reveals the colorful attributes of those who wear it. Opals are one of the two official birthstones for the month of October. It is also also the designated gift for the 14th anniversary.